Ratu Boko or Queen Boko (Javanese: Ratu Baka) is an enigmatic archaeological remain site situated on a plateau, around 3 km south of Prambanan temple. Inscriptions and artefacts shows that the site was occupied at least circa 8th and 9th centuries. Artefacts found in Ratu Boko site including statues of Hindu and Buddhist proved that both beliefs live together with tolerance.

The original name of this site remains unclear, however the local people named this site Kraton Ratu Boko or Queen Boko palace (Javanese: Ratu Baka), after King Boko, the legendary king which is the father of Rara Jonggrang (which is also the name of the main temple complex of Prambanan Temple). It is located for around 3 km south of the Prambanan temple, 18 km east of Yogyakarta or 50 km southwest of Surakarta (Solo), Central Java, Indonesia. Ratu Boko is situated on a plateau at an altitude of 196 meters above sea level and covers around 25 ha area.

Queen Boko Palace was built during the reign of Rakai Panangkaran, one of the descendants of the Wangsa Sailendra. From the inscription found, the palace was originally named Abhayagiri Vihara (a vihara on top of the hill that free from danger). Here, you can see the sights of Yogyakarta, Prambanan temple and Mount Merapi.

The palace is divided into four parts, the central, the west, the southeast and the east. The central section of the compound consists of the main gates, a crematorium temple, a pool, a stone pedestal and the paseban (or audience hall). The southeast part covers the pendopo (attached open pavilion), balai-balai (public hall or building), three miniature temples, a pool and a walled compound popularly named by locals as kaputren (women’s quarter). Ratu Boko Site divided by several terraces. The first of three terraces is reached through a massive gateway built on two levels. On the western edge of this terrace is a high talud of soft white limestone. The second terrace, separated from the first by andesite wall, is reached through a gateway in paduraksa form consisting of three doors, a larger central one flanked by two of lesser dimensions. The third terrace, the largest, contains the most archaeological remains. Another talud and andesite wall separate the third terrace from the second terrace, with another connecting gateway of paduraksa form, this time consisting of five doors, again the central one having larger dimensions than the two which flank it. On the main gate a carving read “Panabwara” that was written by Rakai Panabwara, descendant of Rakai Panangkaran. On the third terrace there are two buildings, one of them has the basic material from White Stone, so it is called Candi Batu Putih or White Stone Temple. The other one called Candi Pembakaran. Ratu Boko site has yielded many smaller artefact including statues, both Hindu (Durga, Ganesha, Garuda, a Linga and a Yoni) and Buddhist (three unfinished Dhyani Buddhas). Other finds include ceramics and inscriptions; a golden plate with the writing “Om Rudra ya namah swaha” on it as form of worship to Rudra as the other name of Shiva. This proved that the Hindus and Buddhist live together with tolerance or in a syncretism. 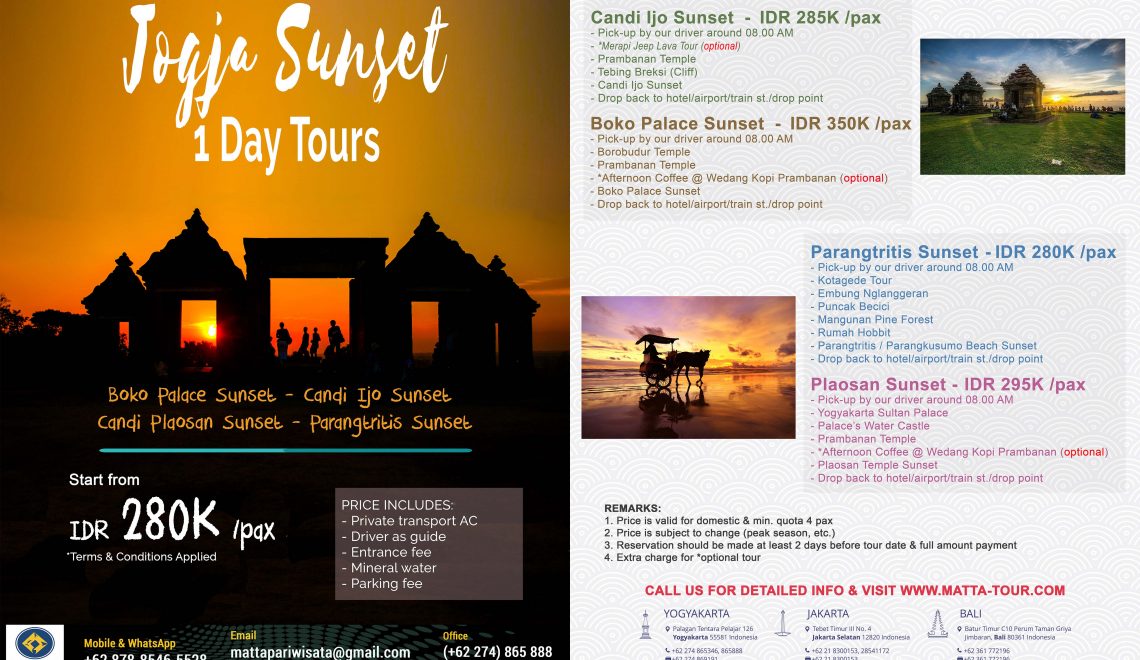 Natures
The Adventure in Instagramable Lands Above the Clouds in Jogja